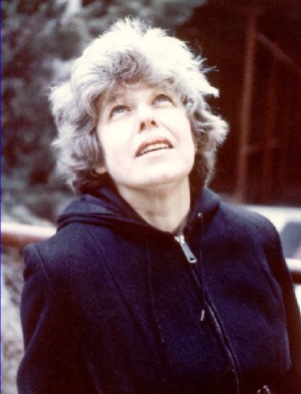 Sydell Rosenberg (1929-1996) of New York City was a charter member of the Haiku Society of America, attending the founding meeting in 1968. She had previously published in American Haiku—the first North American haiku magazine—as well as in Haiku West and Canada's Haiku. Syd served on two Merit Book Award committees and was Secretary of HSA in 1975. She also was anthologized in Frogpond, Wind Chimes, Modern Haiku, Haiku West and numerous other publications. Her senryu were featured in several important haiku texts, including: The Haiku Anthology, by Cor van den Heuvel; and The Haiku Handbook, by William J. Higginson and Penny Harter. In addition, her senryu, “In the Laundermat,” was highlighted in the public art project, “Haiku On 42nd Street” in 1994, in which the marquees of dilapidated, shuttered movie theaters were transformed into showcases for short poems. Much of her work reflected an urban sensibility; in Mr. van den Heuvel’s anthology, first published in 1974, she had referred to her short poems as “city haiku.” Her work was mostly traditional in style, although she also experimented with the form over the years.

Syd attended Brooklyn College and received her Master’s Degree in English as a Second Language from Hunter College in 1972. She became a teacher in NY. In addition to her approximately 30 year career as a haijin, she also published other poetry, as well as inventive literary puzzles and prose - especially short stories – and translated literature from and into Spanish. Syd also published a pulp novel, Strange Circle - on a dare from her publisher boss -- as a young woman in the 1950s, under the male pseudonym, Gale Sydney (a reversal of her maiden name initials, Sydell Gasnick).

Syd died suddenly on October 11, 1996 of an aortic aneurysm. This unexpected loss was a shock to her loved ones. In recent years, her daughter, Amy Losak, has made it her mission to revive some of Syd’s best work and bring it to today’s audiences -- especially children – in a variety of educationally enriching ways.

In 2018, a small children’s publisher, Penny Candy Books, released H Is For Haiku, a collection of Syd’s short poems based on her old manuscripts (illustrated by Sawsan Chalabi). It features two introductions written by Amy and Syd. Syd’s “definition” of haiku, “On What Is Haiku,” was first published in Wind Chimes in 1981, and also appears online in Michael Dylan Welch’s rich scholarly resource, Graceguts. This lovely picture book (available on Amazon and in bookstores) was honored by the National Council for Teachers of English as a “Notable Poetry Book” in 2019.

Sydell was married to Sam Rosenberg (d. 2003) for approximately 41 years. Amy is a freelance healthcare public relations profession. Their son, Nathan Rosenberg, is an insurance agent and financial advisor in Florida. They also have two adult grandchildren, Zachary, a lawyer; and Julia, an actress.

At the ballet
pushed into a corner
a wheelchair

Opening one eye
the bag lady sneers into
the tourist’s camera.

breaking the fast
with pizza and soda
on Yom Kippur

Still there
chartreuse tennis ball
on the fire escape

Soaking up moonlight
on the fire escape
chartreuse tennis ball

On the fire escape
chartreuse tennis ball
not there

Poetry Society Of Virginia, “J. Franklin Dew Award” Second Prize Winner for a “Series of three or four haiku on a single theme,” 1990; “Soaking up moonlight” was also published in Hummingbird, 1993

Picking up a stick
the little boy is master
of the country road.

Declaring a truce
he slurps from his water gun
to cool himself.

Speeding past his friends
dry leaves clinging to sweater --
boy on bicycle.

in pieces, yes
but how beautiful
the pieces!

In the laundermat
she peers into the machine
as the sun goes down.