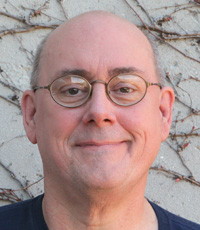 Steve Hodge is the editor of Prune Juice, a Journal of Senryu, Kyoka, Haibun and Haiga and an Assisting Editor of the Living Senryu Anthology.  An award winning, internationally published and anthologized poet, Steve's work has appeared in numerous publications, including Frogpond, Modern Haiku, The Heron’s Nest and others.  His book of haiga, The Sparrow’s Dream, was published in 2014.

pediatric ICU
no red bulbs
on the christmas tree

outside the dance
the Homecoming Queen
kissing the new girl

another birthday
opening a new bottle
of baby aspirin

hearing of the death
of her childhood abuser
silent snow

turning off
the candidates’ debate
mockingbirds

Devil’s Night
the candidate takes the lead
in the polls

report card day
the bonsai
a work in progress

a hint of color
through November fog
remission