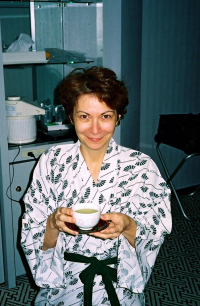 Born in Jamaica Estates, New York, USA
Currently residing in Ireland
Roberta Beary is the 2017 Roving Ambassador for The Haiku Foundation. She is the haibun editor for Modern Haiku. The winner of many awards for her senryu, haiku and haibun, she is a frequent presenter at haiku conferences . She is currently co-editing an international anthology of haiku by women.

school photo
the frown my sister
grew into

family picnic
the new wife's rump
bigger than mine

tour bus
i lie about
everything

born this way …
the orientation
of winter stars

bicurious the moon within the moon