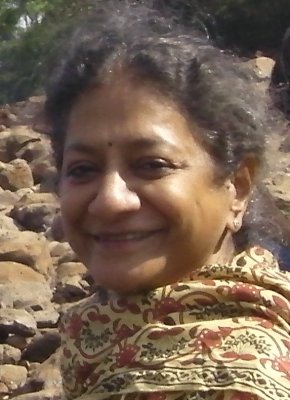 As an assistant editor of LSA I’m looking for a senryu that is fresh, original, and most importantly the ones that catch the essence of the life we live in our day-to-day activities. I’ll be clean bowled by those which show my readers the agonies, failures, successes and idiosyncrasies. I don’t mind a rare one with a seasonal reference too.

Kala Ramesh has been instrumental in bringing Indian school kids and college youth into haiku, senryu, tanka, haibun, tanka prose and renku. Indian classical music, being extempore in nature, has taught Kala to think within and without the box — to be creative, daring and innovative and still adhere to the demands of an art form. Beginning from 2006 she has organised five haiku festivals in her country.

Passionate about taking haiku to everyday spaces, Kala initiated the ‘HaikuWALL India,’ where she gets graffiti artists to paint haiku on city walls. It can be viewed at. http://www.haikuchronicles.com/podcasts/e31-haikuwall-india. She created the ‘Rasika’ form, an eight-verse renku fashioned after Matsuo Basho’s non-thematic style. The link: http://ahundredgourds.com/ahg42/renku02.html

Naad Anunaad, a dream project initiated by Kala is the first international haiku anthology to come from India. It maps a wide range of haiku and senryu as practised in the contemporary worldscape of this 400-year-old art form from Japan. The anthology will be launched on 23 September by Mr. Yoshiaki Ito, Consul-General, Consulate-General of Japan in Mumbai, at the inaugural function of the TRIVENI: World Haiku Utsav 2016, a four-day mega event.